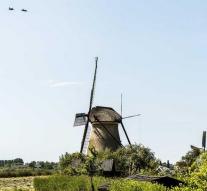 leeuwarden - The Joint Strike Fighter (JSF) makes Wednesday it still fly off circle over the Netherlands. Tuesday flew an F-35 from Leeuwarden Air Base for two hours about the Netherlands, but had to abort the introductory round, because had not taken enough fuel.

Wednesday is flying the new fighter Den Helder, Texel and Vlieland, said a spokesman for the base.

The JSF is also seen Friday and Saturday at the Air Force Day at Leeuwarden Air Base. The intention is that the device then also takes part in the air show.