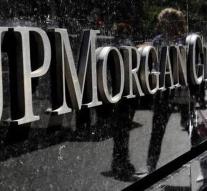 london - Britain has to postpone the Brexit process as the Conservative Party has no absolute majority in the House of Commons, JPMorgan states.

'Perhaps the most obvious conclusion is that the prospect of Britain's postponement in the Brexit process has increased considerably, given the fact that political developments disrupt the process, which is already under great pressure' Said an analyst at the big American bank on Friday.

Analysts from the US bank Citi expect the election results mean that Prime Minister Theresa May is likely to leave.