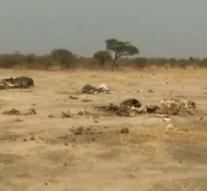 harare - Three journalists in Zimbabwe were arrested after they had suggested in an article about poisoned elephants that a senior police officer was involved.

According to the police investigation found that the journalists from the Sunday Mail lied. " We can not allow them to hide behind the freedom of the press and proclaim falsehoods. " Amnesty International condemned the arrests and called it a " shocking attempt to impose press freedom ".

Last month, certainly 78 elephants were killed because they were poisoned.