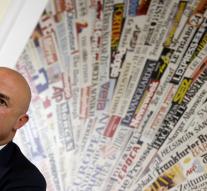 - Two Italian journalists continued Tuesday before a court of the Vatican to answer for revealing books they wrote about the Holy See. Gianluigi Nuzzi and Emiliano Fittipaldi relied on insider information about corruption and mismanagement worth tens of millions of euros in the Vatican.

Initially it was ' do t Vatican to those who had leaked from within: a Spanish bishop, a woman in charge of PR and another man who was working inside the Vatican walls. Last weekend, followed unexpectedly charges against the journalists.

The two writers declared in advance that they had only done their job. In the background, however, the threat of a prison sentence of up to eight years, which is since 2013 to steal confidential documents.