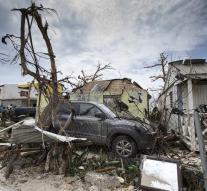 philipsburg - Saint Maarten will be hit by the next Hurricane, José. Most wind is expected at the end of the night. In the Netherlands it's noon.

According to weather service Weatherplaza there is a small light point for Sint Maarten. The hurricane's eye does not come close. At the edge of the center, the winds are the hardest, sometimes wind force 12. St. Maarten is waiting for wind power 8, but the area is so heavily hit by Hurricane Irma that such winds are already a problem.

According to the American Orcane Service NHC, José is now a third category hurricane, with wind speeds up to 200 kilometers per hour, with outliers above. Probably the hurricane will swell even further in the next four months.

When José draws on Saint Maarten on Saturday morning, the inhabitants will experience frightening hours, 'says weatherman Michiel Severin on Weatherplaza. 'In the dark, the wind starts to swell again, you hear the roar of the wind and the beech of the waves, while the rain adds to the noise. '

From sunday, the rest returns and reconstruction can begin.