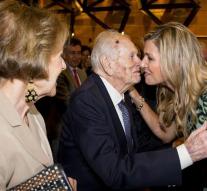 buenos aires - Jorge Zorreguieta is buried on the cemetery of Parque Memorial in Pilar, on the outskirts of Buenos Aires on Thursday. That has provided well-informed sources. Prior to the ceremony, there is an opportunity to say goodbye to Tuesday's 89-year-old father of Queen Máxima.

Besides the queen and her Argentinian family, the royal family is also at the funeral, so the king's couple knew after the death of the royal government. When the king and his daughters arrive in Argentina is not known. The RVD said Tuesday, no further announcements will be made about the funeral that will take place in a closed circle.

The lack of reliable information has resulted in pressure from Argentine media. Thus, Wednesday was reported that the funeral would take place this morning.