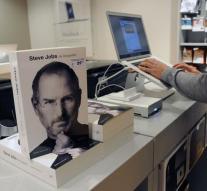 - The focus to keep things . That's what Apple's chief designer Jony Ive mainly remember four years ago deceased Steve Jobs . Ive said in the Vanity Fair New Establishment Summit that after the death of Jobs a lot of things about his former boss said and written , but there was a lot of nonsense at .

"After all these years there is in me a picture of Steve stayed behind which I had never imagined four years ago that it would be so. What remains is the memory of the focus to things that are simply breathtaking and at the same time. He had no hidden agenda. He thought in pure simplicity , almost in a childlike way . And that's really true. Steve felt a civic duty to leave something good for humanity, said the British designer. Ive admits he sometimes just after the death of Jobs thought differently about the Apple founder. But, he goes on to say , of those memories is little left. Jobs was known for its "double character". One minute he could be your best friend for you to burn a minute later from top to down under.