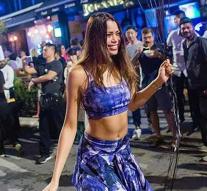 kuala lumpur - The Johnsons were not very curious when the police came to tell them that 18-year-old Ivana Smit had died. They did not make any effort to see with their own eyes where the girl should have fallen. In addition, their apartment appears to have been cleaned before the police could do a trace investigation.

That's what the manager of the building said when she was questioned Tuesday morning in the witness stand by the lawyer of the Smit family.

The naked lifeless body of Ivana was found December 7 on the sixth floor of an apartment building in Kuala Lumpur. She appeared to have been dumped down from the 14th floor. That night the girl had spent with Alexander and Luna Johnson, a couple who had been living in the complex for about four years.

It appears that the Johnsons were surprised when the police came to tell them that their guest had died that night. ' But that surprise went no further than swearing, 'says lawyer Nair, who assists the family. 'They did not walk to their own balcony to look down. While Ivana was still there at that time. '

Manager Vanessa said in her statement that she found it strange. ' I can not speak for Mr. and Mrs. Johnsons. But I would still like to see if I heard such shocking news. '

The family also reacted very differently at the time of the death of Ivana. Spokesperson Uncle Fred: ' When Karin had just been told that Ivana had died, she denied it for days. She only wanted to believe that her daughter was dead if she could identify Ivana. Not before. That seems logical to me. Why did not the Johnsons want that? It only reminds me more of what I already thought: the Johnsons already knew that Ivana had died. '

In addition, today during the testimony of Vanessa today, the apartment of the Johnsons was cleaned by the maid. That happened before the police could do a trace investigation. It is still unclear whether she was sent by the Johnsons or whether this was part of a routine cleaning schedule.

Tomorrow the Johnsons should testify about the night they spent with Ivana before the girl died. It remains to be seen whether they come. For the first time today, a lawyer from the Johnsons was present. He refused to speak to the media and did not want to explain where the Johnsons are currently. ' I am here to take notes of the session. I can not say more. '

During the session last week it appeared that the police heard sound coming from the Johnsons apartment just after finding Ivana's body. Yet the door was not opened when they rang the bell. Vanessa said about this: 'The police knocked and asked for access. There was no opening. But we did hear some traps. It looked like the sound of a glass bottle that broke. '