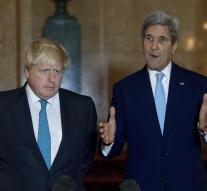 london - Britain and the United States said Sunday that they are considering additional sanctions against Syrian President Bashar al-Assad and his allies. In addition, they called on Russia to help end the conflict in Syria.

'It is essential that we keep the pressure on, and there are numerous measures we consider. That have to do with additional sanctions on the Syrian regime and its allies and with plans to bring those responsible before the International Criminal Court, 'said British Foreign Minister Boris Johnson.

He spoke in London with US colleague Minister John Kerry a dozen colleagues from Europe and the Middle East inquired about the talks on Syria that had taken place a day earlier in Switzerland. Kerry confirmed that the US consider additional sanctions against Syria, but did not mention in this context Russia.