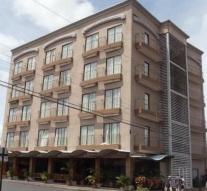 la fortuna de san carlos - A boy of eight has been drowned in a horrible way on holiday in Costa Rica.

Victor from Belgium was stuck with his hand in a jaccuzi. The drama took place in the hot tub next to the pool in La Fortuna de San Carlos.

His parents tell the Belgian News magazine: 'He was clenched with his hand in a drainpit of the jacuzzi, he was stuck in it. '

The parents were close by and tried to save their sons. 'We have done everything to let him go and when that was done, Dutch tourists tried to resuscitate him. '

According to the parents, there was no supervision at the pool.

The Brussels family returns to Belgium this weekend. The family arrived in Costa Rica last Saturday.