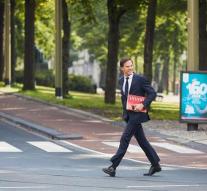 the hague - On Wednesday, a 47-year-old woman is working for a court in The Hague, a 40-year work sentence, and a conditional prison sentence demanded by threatening Prime Minister Mark Rutte. Also, the woman who is struggling with psychological problems should be obliged to be treated, if it is at the Public Prosecutor's Office.

The woman is suspected of threatening Facebook on Rutte last November last year. She wrote in response to a message about politician Sylvana Simons: 'If we can not hang Sylvana, then we'll hang up this bastard. The main perpetrator. '

The woman has shown that she acted in a hurry and that she is sorry for her message. However, the OM believes that there should be 'limits' to the way in which the social debate is conducted. 'To threaten someone with death is such a limit. Whoever does, must be prepared to sit on the blisters. Public social media are not freedoms for cross-border behavior. '

The statement is about two weeks.