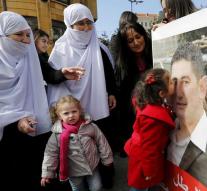 - Jihadists of the al- Nusra Front on Tuesday, according to the Lebanese authorities released sixteen Lebanese who since August 2014 have been retained by the front. Lebanon has released thirteen jihadists, including Saja al- Dulaimi, a former wife of the leader of Islamic State (IS), Abu Bakr al-Baghdadi.

The deal was reached through mediation by Qatar, which is based in the Syrian civil war jihadists. The al- Nusra Front was founded in early 2012 and consists of Sunni extremists who seek an Islamic utopia in Syria. The front is a branch of al- Qaeda. The al- Nusra Front is thanks to the support from the Gulf to the main battle groups considered fighting against the government of President Bashar al- Assad. The front is also in conflict with the Sunni extremists of IS. The IS jihadists from now have the al- Nusra Front in many areas outstripped using their oil-rich ' caliphate '. The head of the Lebanese security service said Tuesday that he is now with IS will negotiate the release of nine Lebanese soldiers.
NEW