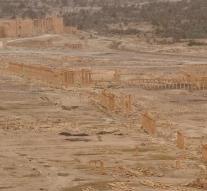 tadmur - Jihadists of the movement Islamic State have in the Syrian city of Tadmur shot down a Russian military helicopter. The two Russian pilots are thereby killed, reported the Russian Defense Ministry.

Tadmur, about 200 kilometers northeast of Damascus, located next to the famous Roman ruined city of Palmyra as the modern Syrian city is also called. The news channel RT reported Saturday that the helicopter was involved in attacks on Thursday jihadists who are advancing. The counter-attack was successful and the jihadists have been beaten back, but on the way back to the base is shot down the helicopter.

Tadmur and Palmyra were owned by IS from May 2015 until the end of March this year. IS founded destruction of Palmyra.