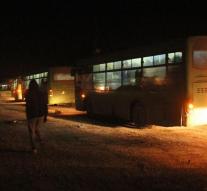 beirut - A group of Sunni extremists Friday agreed to help for two they besieged villages in northern Syria. The group, calling itself Jabhat Fateh al-Sham, the last battle group in Idlib province which agrees with the relief operation, said sources with insurgents in Syria. Previously, the group was known as the al-Nusra Front, the branch of al-Qaeda in Syria.

With this agreement, the aid convoy Friday would still have to go to the villages of al-Foua and Kefraya. Earlier in the day has been reported to it was forced from Turkey aid convoy to turn back.

In the villages are mainly Shia Syrians besieged by jihadists. The jihadists and rebels to let go have northern Syria in the deal about the evacuation of besieged their sympathizers in the city of Aleppo, also pledged wounded from al-Foua and Kefraya. Shiite Lebanese media reported that the evacuation was halted in Aleppo because the jihadists had failed to fulfill their promise over the villages.