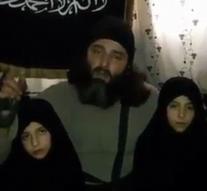 damascus - A video posted on social media would show how two radicalized Syrian parents say goodbye to their two young daughters before they send one of them with a bomb to a police station.

A young girl came last week Friday in an attack on a police station in the Syrian capital Damascus. Thereby further were no deaths, but three policemen were injured. According to state media the girl was only seven years old. Possibly her explosive was detonated remotely.

Now shared a video on social media showing would be to take the child's parents leave for the attack. A man's children would learn how to detonate the bomb. The girls, who were seven and nine years old, both say 'Alahu Akbar', after a burqa-clad woman kisses the girls.

Or one of the girls actually behind the suicide attack is unclear. According to Al-Arabiya, the man in the video is a former member of terrorist group al-Nusra. Syrian activists confirm the authenticity of the images in front of the news.