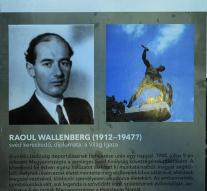 stockholm - Swedish diplomat Raoul Wallenberg was about seventy years after his disappearance yet declared dead. Wallenberg helped during World War II to escape thousands of Hungarian Jews to the Germans.

The fate of the diplomat was unclear for years. He fell at the end of the war in the hands of the Soviet Army. The Russians gave in the fifties that Wallenberg was deceased in 1947 in captivity. He would have died in a cell in Moscow.

Meanwhile, the diplomat was officially deceased. The Swedish tax authorities had to consider more July 31, 1952 as the day he died. The service thus was responding to a request from the SEB bank, which manages the legacy of Wallenberg.