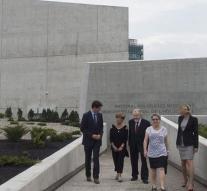 ottawa - On the brand new Holocaust monument in the Canadian capital, Ottawa, there is no indication that it is a Jewish victim. Also, the word anti-Semitism does not appear on the plaque.

Canadian Prime Minister Justin Trudeau unveiled the monument last week with a speech. In his speech, he recalled Canada's dedication to fighting anti-Semitism and racism.

However, after the unveiling of the huge monument, violent criticism broke out. The plaque stated that the monument would honor the 'millions of men, women and children killed during the Holocaust,' as well as those who held 'one of the darkest chapters of history.'

The government, so writes The Guardian, has now removed the plaque. She has promised to adapt the text.