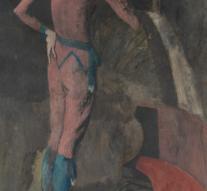 - The heirs of two victims of the Holocaust in World War II Picasso claim from a New York museum.

Alice and her husband Paul Leffmann sold the painting in a hurry for a pittance to pay for their flight to Switzerland, set the heirs.

After wanderings came L'actor, as the work is called, go to the Metropolitan Museum of Art. The heirs want it back, or at least compensation converted a sloppy 100 million. The museum, the painting was of a wealthy art collector, had failed to check how it ever came on the market.

Pablo Picasso painted L'actor early twenties, in his so-called Rose period. The canvas is estimated at over 100 million euros worth. The Leffmanns did it in 1938, when they wanted to flee in haste Italy because it risked prosecution for 12 000 dollars (over 10 000) of the hand.