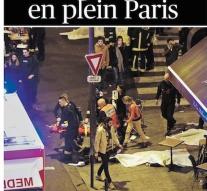 Libération also has the front page devoted to the attacks, under the heading " Massacres in Paris ".

Le Figaro speaks of " War in the middle of Paris ". Le Parisien also untouched by war : " This time the war ".

The sports newspaper L'Equipe has a black front page with the words " L' horreur " (The Terror). That word is also on the front page of La Voix Du Nord : " L' horreur à Paris " (The horror in Paris).