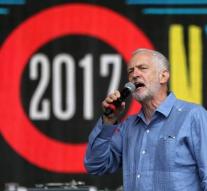 pilton - British opposition leader Jeremy Corbyn appeared on the podium at the award winning Glastonbury Festival in South West England this weekend. Young people applauded Labor's left-wing leader as a pop star and showed banners showing their affection for Corbyn. The young audience of many thousands also sang him with the words 'Oh Jeremy Corbyn.'

Corbyn reiterated in his speech the need to help poor and refugees and to resist greed. He also criticized the wall that the US President Trump wants to put along the Mexican border. The Labor Leader called on to come together because by working together another world is possible. He quoted his favorite poet Percy Shelley (1792-1822).

Sunday is the last day of the five-day cultural festival of especially pop music, dance and cabaret.