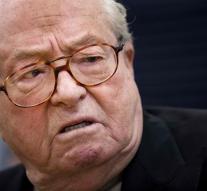 nanterre - The founder of the French National Front (FN) Jean-Marie Le Pen has rightly removed as FN member, but he remains as founder attached to the front as honorary chairman. This has a particular judge in Nanterre Thursday, French media reported.

Le Pen founded the FN in 1972 and led the party until 2011. He preached radical views and the party gave a far-right image. His daughter Marine Le Pen took over the party in 2011. She has since successfully deployed to the nationalist front a broad people's party against the EU, against immigration and protectionism.

She has thereby been blazing row with her father. She put him out of the party in August last year. He then went to court to regain his membership.