Home / Tech / Jarf Netflix has not grown yet 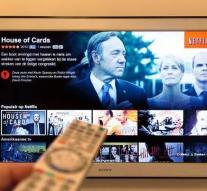 amsterdam - More and more Dutch people watch Netflix. One in three has a subscription, especially twenty-one, and that number will grow for the time being. The way we watch television is changing. 'We are feeling good, but we do not want to be backed up because we are ambitious,' said Vice President Todd Yellin.

Netflix exists Tuesday 20 years. Marketingman Marc Randolph and programmer Reed Hastings started the DVD rental service, then brand new. Customers could order a movie and were sent home by mail. That made Netflix in a striking way: without any lease periods or fines. People were allowed to borrow as long as they wanted and as often as they wanted. It was a success, Netflix went to the fair in 2002 and Randolph and Hastings, though not poor, became wealthy.

Ten years ago, Netflix drove it. The DVD disappeared, people were watching online, when she came out. In addition, Netflix used the same principle as with the DVDs: for a fixed amount per month, people could see what they wanted, whenever they wanted, as often as they wanted. The bingewatching was born.

Netflix is ​​still developing. Recently, the first interactive films and series came. Viewers can decide what the story is about. Whether a person is friendly or aggressive, for example. The episode anyone sees can be different from what appears on the neighbors on TV.

One of the biggest successes is the Narcos series, about the Colombian drug baron Pablo Escobar. Yellin calls Narcos a Trojan horse. 'We Americans are not used to subtitling like you Dutch people. At Narcos we do. People hear Spanish without they passing through and reading subtitles without marking it. And Americans learn to watch foreign movies again. ''

The Netherlands is still missing. Netflix has Dutch movies and cabaret performances, but no Dutch 'originals', made exclusively for Netflix. But that's a matter of time, says Yellin. '' In the end, that happens. I would be shocked if we would not. The Netherlands has many storytellers. ''

The big loser of the whole story is the Blockbuster rental chain. Who could buy Netflix in 2000 for $ 50 million. Hastings was laughed at by the company's top. Meanwhile, Blockbuster is bankrupt. It could no longer compete with Netflix.