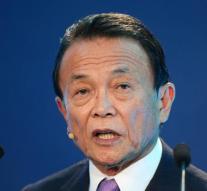 tokio - The Japanese Minister of Finance expressed his admiration for the Nazis. He described the German dictator Adolf Hitler as someone 'with the right driving forces.' Taro Aso added: 'Hitler, who killed millions of people, did not appreciate, although his motives knocked.'

Aso spoke his words to members of his Liberal Democratic Party, writes The Guardian. The British newspaper is based on Japanese Jiji Press.

It did not take long for Aso to get a lot of criticism. He would have defended Hitler's motives for the extinction of the Jews. 'It may be clear that I rate Hitler extremely negatively. His driving springs were also wrong. ' He only wanted to emphasize the importance of politicians who achieve results.