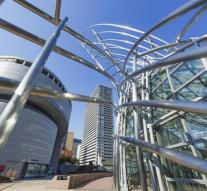 rotterdam - About 380,000 Japanese people have been in Tokyo in recent months for the first major traveling exhibition of the Museum Boijmans Van Beuningen.

The visit to 'Bruegels' Tower of Babel 'and the great sixteenth-century masters' in the Tokyo Metropolitan Art Museum exceeded all expectations, reports the Rotterdam museum on Thursday.

Between 18 April and early July, in the Japanese capital there were 39 paintings, 43 prints and 10 images from the Boijmans collection, including the Tower of Babel (about 1568) and Jheronimus Bosch 'De Marskramer (about 1500). Especially Tower of Babel is very popular in Japan.

The exhibition has now taken place to Osaka, where all works are available until 15 October at the National Museum of Art, Osaka. More than 300,000 visitors are expected.

With the traveling exhibitions under the name BVB Collections, the Rotterdam Museum aims to increase the reputation of the city and the collection internationally.