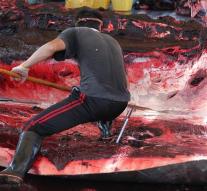 - Japanese whalers are more than a hundred whales killed returned from the annual whale hunt. Reported that the Japanese Ministry of Fisheries Monday.

Each year, making Japanese whalers from May hunt marine mammals, officially for scientific purposes. This is formally accepted, despite the ban on whaling in force since 1986. Has the world's third largest economy, the commercial hunting of whales an explicit objective to allow again.