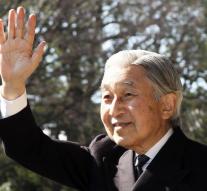 tokyo - Japanese Emperor Akihito (82) Monday in a rare video message hinted at a possible resignation. He said it would be difficult for him to be taken to continue to fully implement due to his advanced age.

Public broadcaster NHK reported last month that Akihito, who has undergone heart surgery and was treated for prostate cancer, would like to retire in a few years. An unprecedented step in modern Japan, for which no legal procedures exist.

In the speech that was broadcast on Japanese television, Akihito said, not in so many words that he would resign. That could be interpreted as interference in politics. 'When I think that my condition gradually declines, I am afraid it may be difficult with my whole being to continue to perform my duties as a symbol of the state, as I have done until now,' he announced.


The Japanese emperor is defined in the constitution as a symbol of the 'unity of the people' and has no political power. While most ordinary Japanese citizens have to understand his wish to 'retire' the conservative supporters of Prime Minister Shinzo Abe is at an abdication and find that the emperor should serve until his death.

According to Japanese law can not retire an emperor. To Akihito which give probability, the law must be changed first. The government has already promised to look into it.

It is only the second video message from the emperor. The last time he was so to the people was founded after the earthquake and tsunami that hit Japan in 2011.