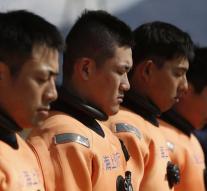 - Japan on Friday commemorated the thousands of deaths that fell five years ago when an earthquake in the sea a tidal wave engulfed the northeast coast of the country. The tsunami led to the worst nuclear accident since Chernobyl in 1986.

Nearly 20 000 people lost their lives. The tsunami hit the Fukushima Dai-ichi nuclear plant unusable. By core melts in three reactors became infected much of the radioactive environment and more than 160 000 people had to leave their homes. Most people have gone elsewhere to build a new life, but still remains around 10 percent in temporary housing in Fukushima province.

Cemeteries in the devastated coastal region, for which only the palisades buildings remained standing and on beaches survivors came together to commemorate the dead.