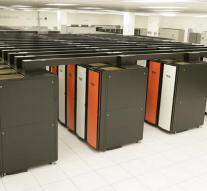 - Japan wants to develop the world's fastest supercomputer. Which should help companies to build for example self-propelled cars or investigate new drugs. The project costs according to Reuters about 19.5 billion yen, converted 163 million.

The supercomputer should have a speed of 130 petaflops. That means he can perform 130 trillion calculations per second, or 130 million times billion.

The fastest computer in the world is now in China. Sunway TaihuLight which has more than 90 petaflops. Number two also comes from China, the Tianhe-2 of 34 petaflops. In the top 500 in the world are 171 supercomputers from China and 171 from the United States. The Netherlands has three systems on the list. The fastest of them, Surfing Sara in Amsterdam, is 97th with 1.1 petaflop.

Japan was the first technological superpower in Asia, but has been overtaken in recent years by China, Taiwan and South Korea. It is no longer the second economy in the world, which is China now. That makes the Japanese nostalgic.