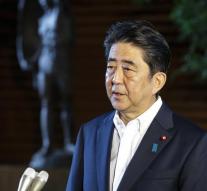 seoul - Japanese Prime Minister Shinzō Abe is asking the United Nations to push pressure on North Korea. He claims that he will do everything in his power to protect his people.

He calls the firing of the North Korean rocket an unrivaled and serious threat to Japan.

North Korea fired a missile in the direction of Japan on Tuesday morning. The people in the north of the country were asked to take precautionary measures, but the rocket flew 2700 kilometers, crossed the country and then broke into three pieces.