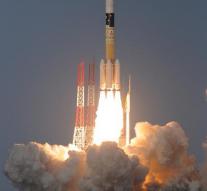 - Japan has put a spacecraft in orbit around Venus. The Japanese space agency JAXA announced Wednesday that the probe Akatsuki (Dawn) has been in his job. ' The circle ' Venus lasts for thirteen days and fourteen hours.

-In 2010, an attempt to maneuver Akatsuki into orbit. But the contact with the probe was preserved and is now coming close to Venus again, JAXA successfully concluded a new attempt.The probe should include the storms that rage on the planet, keep an eye on. Venus is about the same size as the Earth, has about the same composition and is almost the same age. The planet is therefore sometimes referred to as the sister planet Earth. Through research, scientists hope to find out why there is no viable conditions prevail. The temperature at the surface is located at the 500 degrees. The planet is covered with clouds of sulfuric acid and carbon dioxide.
NEW