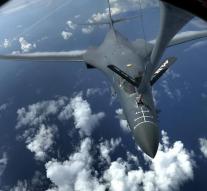 tokio - Japan conducted exercises on Tuesday with American supersonic bombers in the Japanese sky near North Korea. That said the country Wednesday while tensions around North Korea continue to increase.

In a statement, the Japanese defense reported that the exercises took place in the vicinity of Kyushu Island. It was practiced with two bombers of the American Air Force and two Japanese F-2 fighter aircraft.

North Korea said earlier to consider an attack on the island of Guam, a US territory located in the Pacific Ocean. An army spokesman said that the plan of attack was ready and that it could be executed immediately as soon as North Korean leader Kim Jong-un decided.

US President Donald Trump warned the communist country to stop the threats. Trump said that the regime in Pyongyang can count on 'fire and anger as the world has never seen' 'if it does not bind.