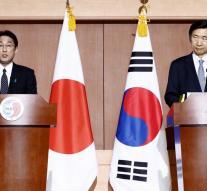 - Japan and South Korea have reached an agreement on a years long dispute on the issue of slavery of women into brothels by the Japanese Imperial Army during World War II. This left the South Korean Foreign Minister Yun Byung Se know Monday after meeting with Japanese Foreign Minister Fumio Kishida Minister.

Japan now recognizes its responsibility in the matter and feels deep . responsible Both sides agreed to establish a new fund to support the victims.

The controversy over the so-called 'comfort women' was so far the biggest obstacle to improving relations between the two East Asian countries.