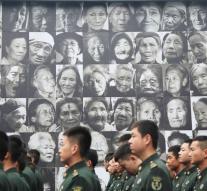 - Japan has suspended dues payments to UNESCO, has Foreign Minister Fumio Kishida Friday, according to Japanese media said. The Japanese government is angry because the educational, scientific and cultural organization of the United Nations, Chinese documents about the massacre recorded-inflicted by the Japanese Imperial Army of 1937 in Nanjing in the World.

UNESCO had this need to consult with Japan and the country the opportunity to have to see the documents, says Tokyo.

The government of the right-wing Japanese Prime Minister Shinzo Abe denies the allegation of China at that time have been slain in Nanjing more than 300 000 Chinese civilians and soldiers. Estimates among historians range from tens of thousands to kill 200 000. Japan China often complains that it wants to wash his own war record white.