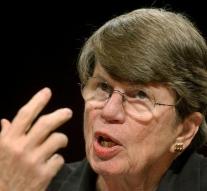 - Janet Reno, the first female US Attorney General who was in office eight turbulent years under Bill Clinton, is at the age of 78 deceased Parkinson's disease. That US media reported Monday.

Reno was from 1993 to 2001 minister. It was only two weeks in office when she ordered the deadly raid on the Branch Davidian sect in Waco, Texas. In 2000 she gave federal agents permission to remove in Miami six Cuban rafter Elian Gonzalez with family and return to his father in Cuba. They also conducted a major antitrust case against Microsoft.

Clinton chose Reno, a prosecutor in Miami, minister after two previous candidates had stumbled in the appointment procedure. Her headstrong and sometimes brusque way of working often led to tensions with the White House. Yet she was more justice minister than any of its predecessors.