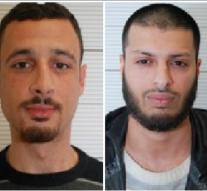 london - Two Britons were Monday sentenced to long prison terms because they foresaw the Belgian terrorist Mohamed Abrini money. Abrini became known as 'the man with the hat ', the terrorist who was involved in the bomb blast at the Brussels Zaventem Airport.

By that attack died in March 32 people. Abrini a month later arrested and is awaiting trial. He got eight months before the attack 3,000 pounds (3,500 euros) in Birmingham. The lenders Zakaria Boufassil and Mohammed Ali Ahmed to go for three and eight years in prison.