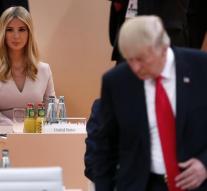 hamburg - The Trump family surprised and criticized Saturday in Hamburg during a workshop of the G20 leaders. Ivanka, the daughter of the American president, temporarily took her father in when he left the conference room for a bilateral appointment.

Melania, the wife of Donald Trump, appeared in the hall at one point. She joined the US delegation while the president remained in his official place.

On photos, Ivanka can be seen between Chinese President Xi Jinping and British Prime Minister Theresa May. According to an official, she replaced her father twice, without taking the floor.

The G20 leaders can bring staff members and use them to replace their boss. Ivanka is the adviser to the president. It is highly unusual for heads of state or government leaders to stall in the hall.