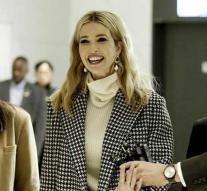 seoul - The daughter of the American president Donald Trump arrived in South Korea on Friday. Ivanka Trump, a counselor to her father, heads the US delegation attending the closing ceremony of the Winter Games on Sunday.

'It is a great honor to be here in South Korea with the US delegation,' said Ivanka according to South Korean media at Incheon airport. There landed earlier this month also the plane with the sister of the North Korean dictator Kim Jong-un. Some media nicknamed Kim Yo-jong the nickname 'North Korean Ivanka. 'She left after a visit of a few days.

Trump stepped outside the plane into a black car. She later dined with President Moon Jae-in. According to the Korea Herald, a kosher, vegetarian menu has been prepared for the Jewish Ivanka. After dinner, a small concert is on the agenda with traditional Korean music.