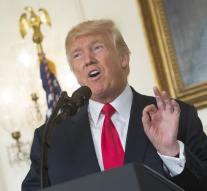 new york - President and businessman Donald Trump gives his name to many companies: towers, golf courses, an airline, a university, steaks, but there is one name that he can not afford: the iTrump. It remains from amateur musician Tom Scharfeld, reports Bloomberg press office.

Scharfeld developed iTrump, an app for the iPhone, so people could learn to play trumpet. He registered the name in December 2010 and the app came in the iTunes Store. About a month later, Donald Trump dragged him to court. Who recently made a statement. Scharfeld won.

What's even more noticeable: Scharfeld triumphed on his own, without a lawyer. He studied the most important laws and regulations in a library and searched for legal documents to learn how to write them themselves. He asked for papers at Trump. Service attorneys did not do anything once and buried him the other time under paperwork.

In 2013, Scharfeld received the same right for the first time. A judge called up Trump to stop his fight. After that, Scharfeld won a few more times, and the final win came last week.

Scharfeld is also the man behind iBone, intended for people who want to play the trombone.