Home / World / Italy's new government can get to work 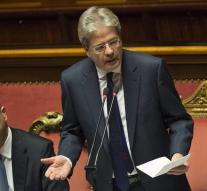 rome - The new Italian Prime Minister Paolo Gentiloni can go to work with his government team. Wednesday he also received the blessing of the Senate after the House of Representatives Tuesday was agreed.

The team Gentiloni is virtually the same as the former Prime Minister Matteo Renzi left after he had thrown in the towel. Renzi stepped on when a large majority of voters are reform plans December 4 was rejected in a referendum. Italian media saw in the 'no' voters as a sign that they had plenty of Renzi and not that they found unacceptable reform.

The Senate would Renzi's plans virtually cease to exist and there was Gentiloni favor. However, he stressed on Wednesday that he has great confidence in the upper house. The formation of this Italian government is remarkably soon expire. The rush was partly prompted by the European summit on Thursday in Brussels.