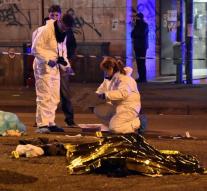 - MILAANDe Italian authorities are concerned that the attack with a lorry on December 19 is driven as possible in Berlin by terrorists in northern Italy. The Friday, December 23 in a suburb of Milan shot a prime suspect, Anis Amri, made a bizarre trip through the north of the country. Which ended at the station of Sesto San Giovanni, where he pulled a gun when officers asked for his identity papers. He was shot.

Approximately 1.5 km from the station Cinisello Balsamo. It is from this town that the truck that the attack was perpetrated in Berlin, with a load of cleaning equipment to Germany on December 16 left. The driver, the Pole Lukasz Urban, was the first victim of the attack.

After the attack Amri went through Germany and to all appearances to Nijmegen and then via Amsterdam to Lyon and Italy. The trip seems purposefully and quickly to expire. Once in Italy Amri switches to local transportation and stops here and there.