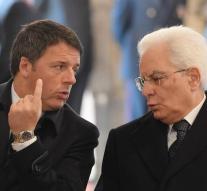 rome - Italian President Sergio Mattarella wants parliament first adopt a new electoral law before any new elections, said a source in the vicinity of the president Tuesday. Interior Minister Angelino Alfano said that the elections can take place after the expected resignation of Prime Minister Matteo Renzi in February, but this seems unfeasible by the condition of Mattarella.

It is up to the president to dissolve the current parliament. The new law must as for him following a ruling by the Constitutional Court on the law that was passed last year for the election of the Chamber of Deputies. The case is only on 24 January. For the election of the Senate is a different law since 2014. Vote with two different electoral laws state as many guarantees continued political instability.

Renzi announced his resignation after losing a referendum on constitutional amendments. The president asked to stay on him until the budget is approved, which Wednesday voted. The leadership of Renzi's Democratic Party (PD) Wednesday discussed the future strategy. In the party leadership to vote for a government of national unity.

The two main opposition parties, the Eurosceptic Five Star Movement and the right-wing Lega Nord, both strongly insist on elections. But it will take time to set up a new electoral system and should 45 days campaign can be conducted after the dissolution of parliament.