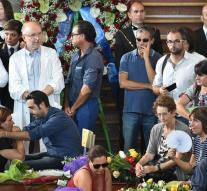 - Public life in Italy is Saturday stalled in memory of the nearly three hundred deaths have fallen by the earthquake on Wednesday. Numerous politicians and administrators have gathered in Ascoli Piceno for a state funeral for 35 victims.

Of the 35 coffins at the gym in the Italian town, not far from the hard-hit villages Amatrice and Accumoli lies, there were two small and painted white. Therein lay the remains of two of the 21 children who died in the earthquake.

Amatrice with 230 deaths to deplore most victims. Among them were some tourists, but no English.

President Sergio Mattarella visited Saturday the disaster village Amatrice before he went to the funeral mass in Ascoli Piceno.