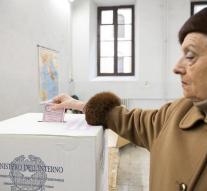 rome - Relatively many Italian voters have already gone to the polling station to decide on a major state reform. Sunday around noon had 20 percent of the approximately 51 million voters 'si' or 'no' checked, reported the Interior Ministry.

The referendum is about a constitutional amendment that strengthens include the position of the Chamber of Deputies, the Italian parliament. The Senate is properly stripped: of the 315 seats remain about a hundred and loses the institute include the power to send the government home.

Reforms should make Italy more manageable. The referendum has attached a second layer got, because the Social Democratic Prime Minister Matteo Renzi has his political fate to the outcome.

The preliminary turnout figure, according to news agency ANSA much higher than previous referendums. Even more people this Sunday morning were votes then on the morning of the last elections to the European Parliament in 2014. When the counter stood around midday on 17 percent.