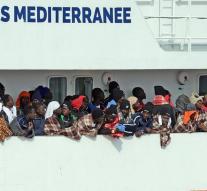 rome - Italy threatens to no longer let ships of emergency aid agencies rescue refugees in the Mediterranean. The country wants other European countries to do more to shelter refugees, so Wednesday was heard from Italian government circles.

Italy says 'more than ample' has fulfilled its obligations and claims to have reached the limit in the capacity of shelter. The threat of the ban would cover all boats, except ships flying the Italian flag or those of the EU border service Frontex.

In the first six months of this year 76. 000 boat refugees arrived in Italy, a growth of 14 percent over last year.