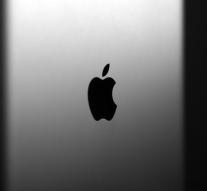 
The Italian newspaper La Repubblica wrote that Apple according to the Italian tax authorities between 2008 and 2013 renounced 880 million euros to pay taxes. Apple did not comment on the case. Previously, the technology group did not guilty to tax evasion.
The manufacturer of, among other iPhones and iPads is already longer under fire for his tax structures. Apple closed including a favorable tax deal with Ireland. The European Commission ruled earlier this year that these agreements are contrary to European law. If the company still must pay the regular rate over the past few years, then that is a noose billion.
NEW