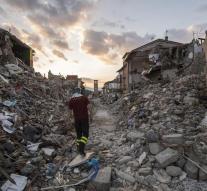 rome - The number of deaths caused by the earthquake in central Italy, last month, is adjusted therewith 296. The earthquake has claimed more lives than the Italian city of L'Aquila in 2009. At that time, 295 people were killed.

The last found victim was an Afghan refugee who on Sunday was found dead under the rubble of his home. Because the pieces are unstable, the body can not yet be salvaged. That Italian media report Monday.

Ten days after the devastating earthquake there are still shocks felt in the region. One of the hardest was early Monday morning. Which had a magnitude of 3.2. The search for victims is complicated in the coming days by the prediction of bad weather. Italy's national weather agency even issued a warning in connection with violent hail and thunderstorms, accompanied by strong wind gusts.


The bad weather also affects the survivors who have taken up residence in tents. The authorities fear that the camps will not be resistant to the storm.