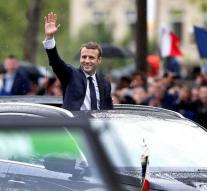 rome - A French diplomatic initiative aimed at solving the long-term crisis in Libya raised the fury of Italy. That looks like another example of newly elected President Emmanuel Macron to pick up his nose for Rome.

France previously confirmed that there are talks in Paris between Fayez al-Serraj, head of the internationally recognized Libyan government in Tripoli, and Khalifa Haftar, a powerful military commander in the divided country.

Italy had previously taken the lead in trying to bring peace to its former North African colony. 'Macron wants to be more involved in Libya. That's fine, but he put us off. We were not consulted, 'said a diplomat in the Italian Ministry of Foreign Affairs, who did not want to be named because of the sensitivity of the matter.

Opposition politicians accuse the government of Prime Minister Paolo Gentiloni of allowing the French to exterminate Italy when it comes to Libyan diplomacy. Since the fall of Muammar al-Kadaffi in 2011 there is a civil war in the oily country.