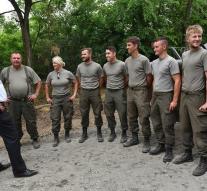 rome - Italy called on Austria the ambassador to Austria on Tuesday. The step follows the announcement by Austria of border controls between the two countries, according to the Italian Ministry of Foreign Affairs.

Austria has stationed four armored vehicles near its border with Italy to stop migrants and is likely to start 'very soon' with controls at an important border crossing, officials of the Austrian Ministry of Defense said Tuesday. The planned controls also include the busy Brenner Pass, a step against which Italy has already warned that it is against EU rules for free movement.

'I expect the border controls to be introduced quickly,' said Minister of Defense Peter Doskozil on Tuesday against the newspaper Kronenzeitung. Doskozil's spokesman later said that there is no concrete timetable for the new controls. 'But we see how the situation in Italy becomes acute. '

Both Italy and Austria are members of the Schengen zone of open borders, but freedom of movement is at risk by the reintroduction of cross border controls since the number of immigrants since 2015/16 has increased substantially.

Italy has received more than 80,000 migrants this year, most of whom have come by boat from Africa. Italy is the country where most refugees arrive.