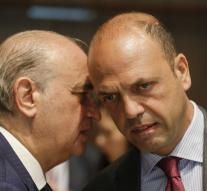 palermo - The Italian police foiled a plot by the Mafia to the Italian Interior Minister, Angelino Alfano, to murder. It has a source around the examination stated. The police officially confirmed only that a few arrests in the Corleone mafia stronghold was preventing a murder but called the name of the minister not.

According to the source around the study were conversations between members of the Sicilian Cosa Nostra eavesdropped and recorded which spoke of an attack on the Sicilian-born minister. " If we agree, then we catch him right in the head ", would have said one of the gangsters.

Alfano is in favor of heavier penalties for mafiosi. That may be the reason the organization wanted to kill him off.