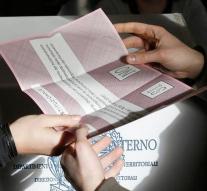 rome - Italian voters have voted Sunday against the profound state reform proposed by the government of Prime Minister Matteo Renzi. According to exit polls published immediately after closing the polling stations, voted between 42 and 46 percent for the plans. The opponents were 54 to 58 percent clearly in the majority.

Renzi has previously said he will resign if the population would vote against his proposal. He announced earlier in the day all that he will give a speech at midnight.